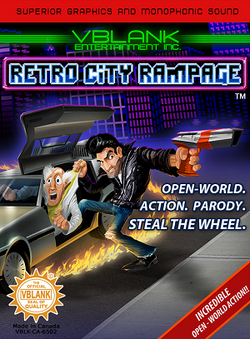 Retro City Rampage is a downloadable adventure video game for WiiWare, Xbox Live Arcade, PlayStation Network and Microsoft Windows developed by VBlank Entertainment. It is a parody of retro games and pop culture as well as the popular Grand Theft Auto series and the games that followed it. It was released on October 9, 2012 for PS3, PS Vita and PC.

In Retro City Rampage, players take control of a henchman by the name of Player, who is part of a major crime syndicate known run by the Jester. The game is inspired by Rockstar's Grand Theft Auto games, in that the player can complete a variety of missions within an enormous city that is open to explore. There will be around 50 story missions and 30 challenge levels in total.[1] Gameplay elements shared with GTA include the vast assortment of weaponry, the miscellaneous shops, the ability to hijack vehicles, and the ability to attract police attention with violence and destruction.

As an homage to numerous 8-bit videogames, Retro City Rampage incorporates design elements from a lot of different genres. Although it is primarily played from a top-down bird's-eye viewpoint, in specific sections, it may switch to a strictly two-dimensional perspective in the style of a 2D platformer.

The concept for Retro City Rampage originally came from a homebrew project that began in 2002. In his spare time, game programmer Brian Provinciano constructed his own Nintendo Entertainment System development kit and set about remaking one of his favourite titles, Grand Theft Auto III, with 8-bit sprite graphics, under the codename of Grand Theftendo. At the 2011 Game Developers Conference, he revealed his methods, showing how, over several years, he built advanced software tools to help him overcome the limitations of Nintendo Entertainment System hardware, before eventually shifting development to the PC.[2]

At one point in the process, he started to add characters and locations from other games he enjoyed from his childhood. This ultimately inspired him to work on the project full-time, but instead of using scenarios from GTA III, he decided to create an entirely new game with original content in 2007, which would be released as a downloadable title for consoles. He used a real-time map editor to adjust and debug on the fly, and also integrated several suggestions from playtesters.

For most of the project, he had worked completely independently on the design, coding and art. Later in development, he hired a pixel artist to assist with the visual design of the game and went through revisions. He also brought in three renowned videogame composers, Leonard "FreakyDNA" Paul, Jake "Virt" Kaufman and Matt "Norrin Radd" Creamer, to create chiptune songs for the game's soundtrack. Provinciano stated that the game contains roughly two and a half hours of chiptune music. On February 22, 2012, the Retro City Rampage soundtrack was released on Bandcamp.[3]

The game pays tribute to many titles through its storytelling, levels and character abilities, such as Super Mario Bros., The Legend of Zelda, Mega Man, Contra and Bionic Commando, among others. The game also pays tribute to "cheesy" one-liners, television shows and pop culture, as well as cameos including Phil Fish, Billy Campbell, and Phil Guerrero (of YTV fame). Provinciano later altered the parodied images to avoid copyright issues and obtained permission to use the likenesses of the aforementioned cameos.

Retrieved from "https://retrocityrampage.fandom.com/wiki/Retro_City_Rampage?oldid=4403"
Community content is available under CC-BY-SA unless otherwise noted.